Li Xinmo came to Meibei for the second time to attend the Performance Art Festival. The theme around land. Meibei is the first place of the Land revolution. The village is full of slogans with the slogan "Strike local tyrants, divide fields". Through the mottled relics, it seems that the historical scene can be restored. The innocent landowners were persecuted, killed, and their property and land were occupied and deprived. When the Great Famine came, countless villages were covered with corpses and human flesh was eating each other. The land here is mixed with too many people's blood and covered with white bones.
She chosen Yicang as the space for the implementation of her works. The granary was used to store grain for the people in famine in ancient time. It would be of special significance to make this work related to the Great Famine in such a place. There was a small courtyard on the side of the warehouse. The courtyard presents a picture of the classical courtyard in the south. It has green bricks, grey tiles, high walls and curved paths through withered weeds. There were also some corrugated pillars slanting across the path. Inside, near the wall, there are two rectangular stone platforms. Dark red paint was painted on it, which has been mottled over the years. The courtyard looks like a theatre, a space with context and poetry, and with the memory and traces of history and time. It could have been also felt a gloomy and dark atmosphere pervading the courtyard, which was reminiscent of the cemetery.
On one side of the courtyard, there was a pile of red bricks, and on the other side, there were some black bricks. she had a dark brown pot in her hand. The jar was seen by an old water well, and when she inadvertently caught a glimpse of it, I was deeply attracted by its dark color, its heavy shape, and its silence. It always was very deep and contains many secrets. Imagined that there were some souls of the dead in the jar, as if you could hear the sobs of those souls. This jar reminded her Paul Celan's poem The Scenery of Urns. The poem gave her unlimited reverie. So, this performance was initially named "Urn of Ashes".
In this act, she had chosen white rice, the symbol of grain, as the material, which was directly related to the history of land famine. White rice was put into the dark brown jar. She holds the jar and sprinkle the rice from the jar on the path, on the road, on the pillar and on the table. From a distance, the rice sprinkled out liked white ashes. With the music of dark style, she poured it all the way, and the courtyard changed very quickly. It seemed that there was a snowfall in an instant, a snowfall in early summer, and a sense of dreamfulness and surrealism arose spontaneously.
After sprinkling the rice, she went with barefoot to the front of the red bricks and put a pile of bricks on her back. In concentration camps and reform-through-labour camps, back bricks were a form of hard labour, and in the Cultural Revolution, back bricks were a form of punishment. She moved a pile of bricks onto the rectangular stone platform and arranged them word by word until they were full. She went to the other side of the wall with the black bricks on her back. Those were some old bricks. She carried them to another table and put them out one by one.
Next, she took a black brick and a red brick. hit each other hard, and the bricks broke apart in the sound of violent impact. One after another, until all the bricks on the table were broken. In the end, she was exhausted. Put the dark brown jar on a table, and she lied on another table with her back to the audience, just like she was lying on a snow bed. At this time, thunder rolling, cloudy wind around, and then pouring rain down.
Later I renamed the work Snow Bed.
Landscape Covered with Urns
Landscape full of urns
dialogue
From a smoking mouth to a smoking mouth
They eat
A piece of ground bacteria from a lunatic asylum patient
Unburied Poetry
Find out its tongue and teeth.
A tear rolled back into its eyes
Left hand, orphan
Half Pilgrim
Shells - they give you them
And then they tie you up——
Listen and shine the sky transparently:
Masonry game against death
Can start
Snow bed
Eyes, no world in the crack of death: I come
Growing up Hardly in Heart
I come
Moon mirror, cliff. Tilt down
(Spots shine with breath. Blood streaks.
The soul is close to the cloud again.
The shadows of ten fingers are caught.
The world is out of sight
Eyes in the cracks of death
Eyes and eyes: Snow bed under us, snow bed
Crystal continuous
Like time, we fall.
We fall, we lie there, we fall.
And fall:
We were. We are
Together with the night, we are one.
Pass. 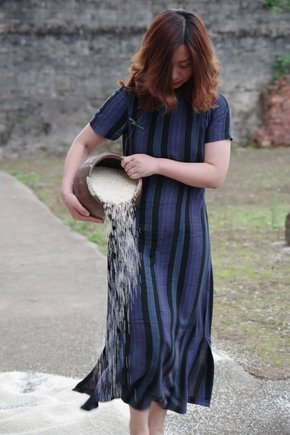