The performance was based on “Forgotten Home”, a poem from Paul Celan:

Der Sand aus den Urnen
Green as mould is the forgotten home
In front of every blowing door your beheaded musician turns blue
For you, he hits drums made of moss and rough pubic hair.
Draw your eyebrows in the sand with a purulent toe
He paints longer than it is, and your lips are red.
Here you fill up the urn and feed your atrium.

Li Xinmo came to this bustling commercial city center from the mountains with moss, green and a huge heavy drop of water. The world begins with a drop of water, it is the origin of all life, it is the womb, it is the archetype of tears, it is the ticking of the clock of time on earth. The background music was a slow but steady tolling bell, a disturbing chime. There was a change in
The performance. She took the heavy water drop (balloon) and arranged lichen moss, the oldest of plants exiting before animals and humans. she lay on moss and covered her mouth with this ancient green life. The water contained in the water drop finally slipped. Green liquid, the blood of the plant spliied over her body. Eventually the potted plant grew out of her belly, just like growing out of the earth. At this point the rolling thunder above which began in the middle of the performance has turned to spits of rain. Just as the performance ends the clouds above burst into heavy rain. 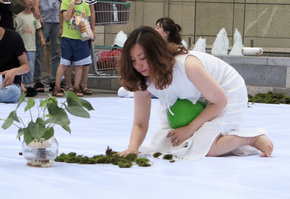