Li Xinmo tried to create a visual poem. Through the superposition and connection of different images, a kind of poetic space and imagination is constructed. This work is inspired by the stories and legends of robins. The Robin is said to be the bird of God. When Jesus was crucified, the Robin flew to Jesus and sang for him to relieve his pain. So, his chest was dyed red. Another source is a dark English nursery rhyme: robins were killed by sparrows, flies were witnesses, fish took its blood at the Bird Trial Conference... At the next bird trial conference, the sparrows will be on trial... This work is not an illustration of the story, but a symbol of polysemy created through abstract language. Another source is a personal experience. When she was a child, she caught a blue bird. she really liked it and wanted to raise it. But three days later it died and died in her hand. After that, she never caught a bird, nor saw the blue bird again. Until many years later, the dead blue bird remained in her memory. She couldn't forget it. Later she knew the blue bird was called robin. When a memory cannot be forgotten, it becomes a work to seal that memory. After doing this, she should say goodbye to the dead bird. she began to imagine doing this inside a space, but when she came to the scene and found that there was no suitable space inside, so she chose a place to do it outside, just as a courtyard looked very suitable, it itself has a kind of poetry. it just rained yesterday, there was a pool of water in the courtyard. she made the shapes of birds by white clay. The birds were soft and paralyzed. They lay on mossy slabs one by one. Liked the soul of some abstract bird. She came to the front of the water, next to a pile of blue, she dipped the needle and thread in blue, pierced her clothes, covered with blue marks on her body, those needles and threads were hanging on her. Then she holds the blue feathers and blow them up at the water's edge. Blue feathers float down like dreams. she finally bent down in the water to finish the performance. 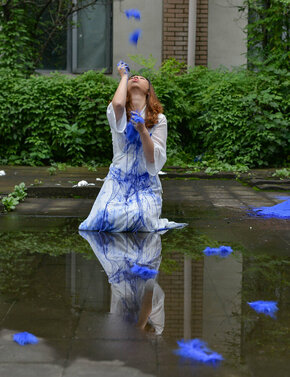